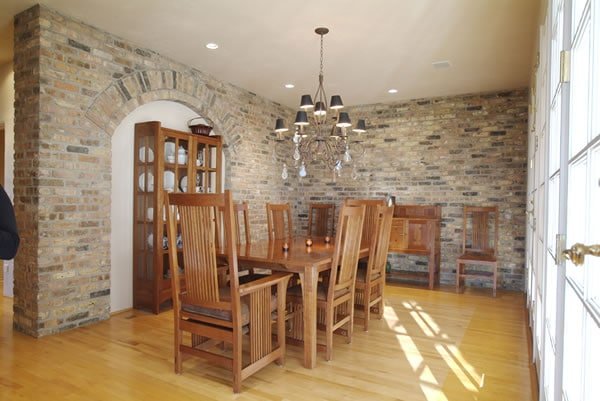 “Fixer Upper” star Joanna Gaines may not be as crazy about Old Chicago brick as she is about shiplap, but she sometimes features the bricks to outstanding effect in her creations. We thought it would be fun to review a few of our favorite episodes of “Fixer Upper” featuring Old Chicago bricks.

First, we’ll give you a little background on both counts: Old Chicago brick and “Fixer Upper.” Old Chicago brick, also known as antique depot bricks, are just what they sound like, reclaimed from Old Chicago buildings. These classic antique bricks bring a century of architectural history to your home. On many of them the “union made” logo still is visible stamped into the clay, bearing witness to a proud tradition of quality craftsmanship. Colors tend to be on the lighter side, ranging from buff to pink.

“Fixer Upper,” getting ready to start its 4th season on HGTV, features designer Joanna Gaines and her husband, Chip, a real estate agent and renovator. The couple is based in Waco, Texas, and the show features homebuyers who choose from three homes in various need of repair. The couple then complete the houses in approximately 6 weeks and stage an unveil. Since the show is based in Texas, Joanna’s style tends toward a more farmhouse and homey feel, making Old Chicago bricks a natural fit in her designs.

Nicknamed by Chip for the long seed pods dangling from a catalpa tree in the front yard, the Beanstalk Bungalow became the choice for Stacie and Ben Childers, who were moving from California to be near their daughter who was attending Baylor University. The couple wanted to turn the home into a European-style cottage, and Joanna’s use of Old Chicago bricks as pavers in the breakfast nook helped achieve the effect.

When Jeff and Michelle Sanders wanted to create a French Country look in the suburbs, no one was sure if Joanna could turn this ’60s ranch house into the home of their dreams. But with a huge budget, she was able to pull off the transformation, including using Old Chicago bricks, this time with a washed-out finish, as pavers for a patio room on the back of the house, where the family was able to enjoy a spectacular view.

Of course, Joanna doesn’t confine her use of Old Chicago brick to covering floors. In the transformation of this 1920s, small-town home, she crafted a pillar that extends along a staircase connecting the main floor to the upstairs bedrooms. Jessica and Noah Dansby were looking for a large home for their three boys in Hillsboro, a historic community about 30 minutes from Waco. The brick pillar helped connect the modern style with the historic nature of the home.

Our very favorite use of Old Chicago brick has to be in the transformation of this ranch house in the tiny town of Hubbard. With a large blended family, Paul and Deanna King were looking for a larger home in the community of 1,500 people that they love. Joanna lovingly used the Old Chicago brick as a backsplash in the kitchen, making it appear as if the brick had been exposed from a turn-of-the-century home, not a no-frills ranch home on the Texas prairie.

Now, it’s your turn. Have you seen a favorite episode of “Fixer Upper” using Old Chicago brick. Or any other home improvement show, for that matter. Leave us a comment on the blog.

Contact us if any of these shows have inspired you and you would like to use Old Chicago brick in your home renovation or construction.