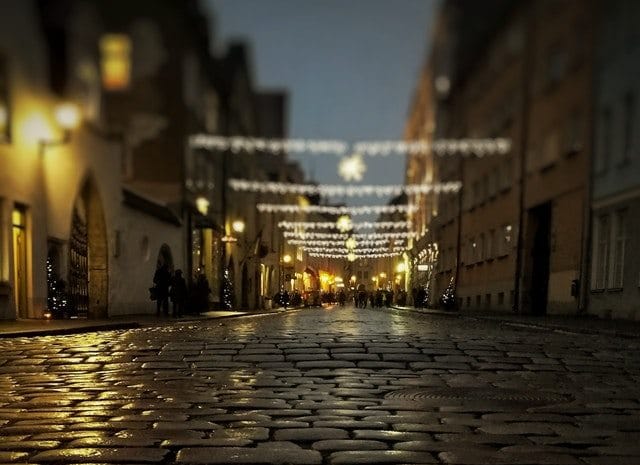 Mr. M. Levi obtained the first patent for paving brick roads during the 1870s. Shortly thereafter, thousands of brickmaking companies opened their doors to keep up with the new demand for covering streets all across America. Toward the mid-1900s, asphalt roads became increasingly more common, resulting in many brick streets being covered over or replaced. Over the past decade or so, there has been a growing movement to consider the advantages of brick streets. Here are a few notable cities with brick streets that have taken measures to build new streets or restore existing ones.

The city of Atlanta, Georgia is one of the latest ones to utilize brick streets. In 2015, more than six miles of streets near Turner Field were torn up and replaced with red Georgia brick. The Atlanta Department of Watershed Management came up with the idea as part of its overall plan to control flooding. The streets in question contain a layer of filtration rock with loosely-spaced bricks over top, allowing for better drainage than asphalt would.

The brick paving method used in Atlanta is actually nothing new, as it dates back to the Roman Empire. Similar projects have also been completed in Philadelphia, Portland, Chicago, and Los Angeles; however, the one in Atlanta is the largest one of its kind thus far.

In 2009, Georgetown Metropolitan made the case for reverting several asphalt roads back into brick. According to this publication, residents of the Poplar Street Neighborhood Association wanted to bury unsightly electrical wires underneath the street, and believed it would be easier to do so if the asphalt were replaced with brick. Georgetown Metropolitan also claimed that repaving certain roads with brick would allow for better speed control, listing several very short streets in residential areas that could benefit.

Although Poplar Street itself remains covered in asphalt, some brick streets in Georgetown have nonetheless been upgraded. An example is along “O” and “P” streets between Wisconsin Avenue and 37th Street. Beginning in 2011, six blocks of streets were torn up and utility lines replaced. Original brick was then placed back on the street and sidecar tracks, but in a manner that provided a more even surface. This allowed streets to maintain their original charm, while also being safer to walk and drive on.

As far back as 2006, a number of Chicago suburbs were mulling the idea of removing the asphalt that covered many of their original brick streets. One such suburb was Wilmette, which restored seven blocks of roadway formerly covered by asphalt. Others like Forest Park and Downers Grove have taken measures to restore their existing brick streets because they recognize their importance in keeping traffic down and maintaining character.

Oak Park officials have long been toying with a plan to uncover brick streets, particularly those along Lake Street and Oak Park Avenue. The thought was that by doing so, they could provide a more uniform look throughout all of the downtown shopping districts. Thus far, a lack of funding seems to be what is holding the village back, as officials have been denied grants for road improvements at least twice over the past few years.

These are just a few examples of how cities across the country are either returning to brick streets or taking measures to protect their existing ones. You can enjoy the same benefits by installing a brick driveway, sidewalk, or walkway on your own property. By using historical, reclaimed brick for your project, you will prevent a great deal of landfill waste,a while at the same time adding nostalgic charm to your home. To find the right brick pavers for your project, please contact us.