The History of Cobblestone in the United States 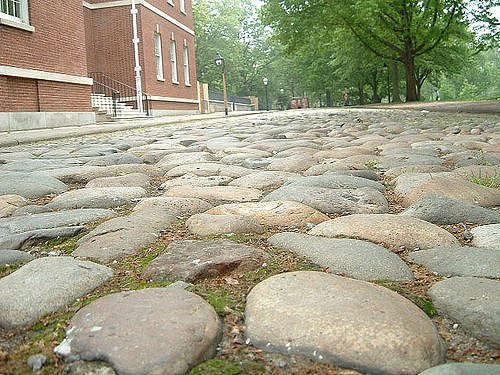 Cobblestones are a strong, natural material, originally collected from riverbeds where the flow of the water made them round. When set in sand or bound with mortar, cobblestones once proved perfect for paving roads. With the strength of cobblestone, no ruts developed in the streets. The surface remained flexible, so it wouldn’t crack during freezes. The stones also wouldn’t easily crack due to any normal movement on the road. Cobblestones prevented a road from getting muddy when it rained or from getting dusty in dry weather. If a stone did need replacing for any reason, it was easily dug up and a new one put in its place. Read more about the history of cobblestone in the U.S.A below.

Though commonplace in Europe, cobblestones were also used extensively in the United States. In the 1800s, most cobblestones arrived on ships from Europe as ballast. The cobblestones were then configured into city roads. In the mid-1800s in Philadelphia, most of the city streets were cobblestone. Today, Elfreth’s Alley is still paved with old cobblestones. In Pittsburgh’s Squirrel Hill North, a cobblestone street lined with beautiful, historic homes still exists.

Cobblestone streets in the historic district of Charleston, South Carolina have now been preserved as well. These streets, made up of used cobblestones, also came over in ships from Europe and were eventually repurposed as pavement for the city’s roads. By the late 18th century, more than ten miles of streets in Charleston were ultimately paved with the old cobblestones.

In Omaha’s Old Market district, the cobblestone streets date back to the late 1800s, when the area used to serve as a railroad center. Now it’s a popular entertainment center. In Minneapolis, original cobblestones still pave Main Street — the oldest street in that city. When exploring Old Town Alexandria in the state of Virginia, one can find Captains Row lined with old homes and cobblestone streets. In Boston, you’ll find Acorn Street on Beacon Hill paved with antique cobblestone. It’s known as the most photographed street in the United States.

Historically, cobblestones were not only used for roads but for buildings as well. Cobblestones were once found in the Finger Lakes region of New York and used in architecture before the Civil War. Many of the old cobblestone buildings still standing today are in or near Rochester, New York, where the style was prominent.

Another public cobblestone building is the Alexander Classical School in Alexander, New York. This three-story school was first erected in the 1830s with cobblestone. After being used for a variety of purposes throughout the years, it was finally remodeled in the 1990s, restoring it to its natural beauty with reclaimed cobblestone to keep its historic charm. The building now contains a museum.

Due to their uniqueness and beauty, old cobblestones are once more becoming popular building materials. Old cobblestone, where the surface of the stones became smooth through years of activity, is now used to pave driveways or for use on patios, walkways, and more. For additional information about authentic, antique cobblestones for building projects or to restore properties, please contact us today. Reclaimed or used cobblestones uphold “green” building principles, and they add a unique beauty to any residential or commercial property.