The First Brick Road: How Brick Streets Were Laid in the Late 1800s and Early 1900s

Bricks have been around for centuries, bringing with them both beauty and functionality. As roads became more sophisticated and horse drawn carts and early automobiles began to populate them, bricks became especially important. How brick streets were laid in the late 1800s, early 1900s is an interesting story.

Before the late 19th and early 20th century, most streets were made out of dirt and gravel. At this time, however, the roads especially in cities became nicer and began to be constructed out of bricks.

In 1870, a man named Mordecai Levi from Charleston, West Virginia decided to try out a new method for creating roads. He used bricks to pave Summers Street, working as the brain and muscle behind the endeavor while a certain Dr. Hale was financing the project.

Because roads were constructed out of gravel or compacted dirt when it would rain parts of the road would wash away, or become a giant mud puddle. This meant that using those roads after a storm would be treacherous and very difficult if not impossible to traverse.

Levi created the idea of using brick road construction to pave the early streets. By 1873, he had paved an entire block. He even sought out a U.S. patent in order to ensure that his idea of paving the roads was protected by law. Soon, bricks became the solution to the increasing problem of how to improve roads under heavier traffic.

Bricks became a great option for creating streets, because they were extremely durable. Generally speaking, the most commonly used types were vitrified bricks, a glazed variety that began to become popular in the early 1900’s. Their glaze meant that they were impervious to moisture and chemical corrosion, which made them ideal for roads.

According the patent created by Levi, the bottom layer of any road would be graded or filled depending on the current structure of the road. Next, a layer of broken stone, slate, gravel or sand is applied over the leveled road bed. A second layer of asphalt or material with a similar consistency was placed next.

A third layer consisted of sand, followed by the bricks and of course curbs were placed along the sides of the roads. In the image he included with his patent, it also appears that roads were created with a slight rise in the middle. This was probably to help with additional drainage of the road.

Brick roads worked excellently because they allowed water to absorb through them more naturally, without the same problems today’s roads have with expansion and contraction. Additionally, bricks have amazing longevity and are very durable. Once word of Levi’s brick road construction method got around, it became very popular around the United States, but especially in cities like Philadelphia. 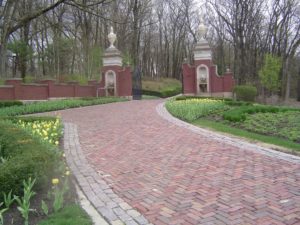 Bricks were a fantastic answer to contemporary problem with the roads. Not only did they offer a solution to heavier traffic, but they looked good in the process. For many cities, bricks revolutionized transportation and ended limitations caused by weather. Of course, as time went by, other methods started to be used to create roads. But as we all know, the modern roads of today are not without their problems.

As cities continue to dig up old roads and remove bricks, it becomes an easy decision to keep the brick roads of the past. Although they may require flipping or are bumpy from shifting ground, you can enjoy the beauty and history of the old roads.

If the roads are ripped up and the old bricks are no longer used, you can claim that piece of history for yourself and find a way to include some wonderful and beautiful vintage bricks in your own home. To learn more about the construction bricks we have to offer, and how to incorporate your own piece of history into your home, please contact us.