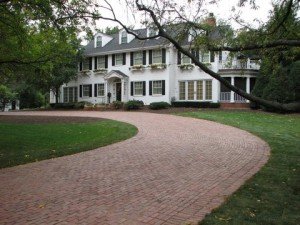 Company founder recognized antique bricks’ beauty and potential value before a market for them even existed.

Gavin Historical Bricks – today one of the country’s largest companies specializing in reclaiming high-quality antique bricks and stone – started some 20 years ago quite by accident.

John Gavin, the company’s founder, was working as a consultant in 1997 when he came across a large quantity of antique brick pavers being removed from a street near what is today the company’s headquarters in Iowa City, Iowa. In the 1800’s countless Midwestern towns paved their streets and even sidewalks using bricks. Those bricks were subsequently removed, as they continue to be today, when new paving methods were introduced and as street improvement projects occur.

Gavin purchased the antique bricks to use on his own driveway and was so pleased with the results that he thought others might be interested in using them on similar projects so he bought more of the reclaimed bricks. While considering whether he should return and purchase still more of the antique pavers being removed, Gavin learned that an out-of-state company had beaten him to it, purchasing all the remaining historic bricks available from that particular construction project.

“When that occurred,” explains Mike Gavin, Historical Bricks’ president and the founder’s son, “he sensed there might be a business opportunity lurking here.”

So John Gavin began calling small towns throughout the area to see if they had stockpiles of antique bricks that had been removed during street renovation projects. Plenty of towns did and he began buying them.

“About that same time, my brother Patrick and I were graduating from college,” Mike Gavin explains. “We had an interest in working for ourselves but the three of us still weren’t really sure what we had with the reclaimed bricks or if it could be a business. We just started publicizing them for sale locally and there was some interest from people building patios and such. Then we started calling new brick dealers and offering the antique bricks as another product line and there was interest there too so that was encouraging.” 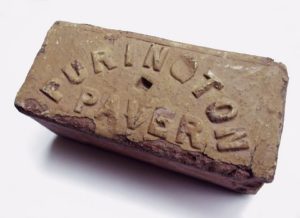 In the late 1990s there wasn’t a lot of demand for antique bricks, Mike Gavin says, but thanks in part to his older brother Patrick’s skill with using the internet – which at that time was still in its infancy – they were able to publicize their historic bricks there and soon began selling and shipping them around the country.

To meet the growing interest in and demand for their product, the Gavin’s began searching for antique brick sources throughout Iowa and later expanded to neighboring Illinois, searching not only for antique brick pavers but also old wall brick and reclaimed cobblestones, the latter of which weren’t used in Iowa but were readily available in Illinois.

Over the next two decades, the business grew quickly.

“Today we’re considered the largest company in our particular niche – reclaimed brick and stone,” Mike Gavin says. “There are other people in the industry, but when it comes to antique brick pavers, it’s what we started doing and today it’s our bread and butter.”

Because of that long history, their expertise, the contacts they’ve developed, and the set up of regional brick yards across the country where they process their antique bricks, Gavin says they can afford to be very picky when it comes to the reclaimed bricks they purchase, choosing only the best of the best.

“We’ve crossed over the hurdle of bringing awareness about antique brick’s beauty and versatility to consumers, architects, builders and designers,” Gavin explains. “Today we’re seeing increased demand from buyers using our product in historic building renovation and preservation projects, as well as in new construction with a green focus.

“It’s an exciting time to be in the industry.”